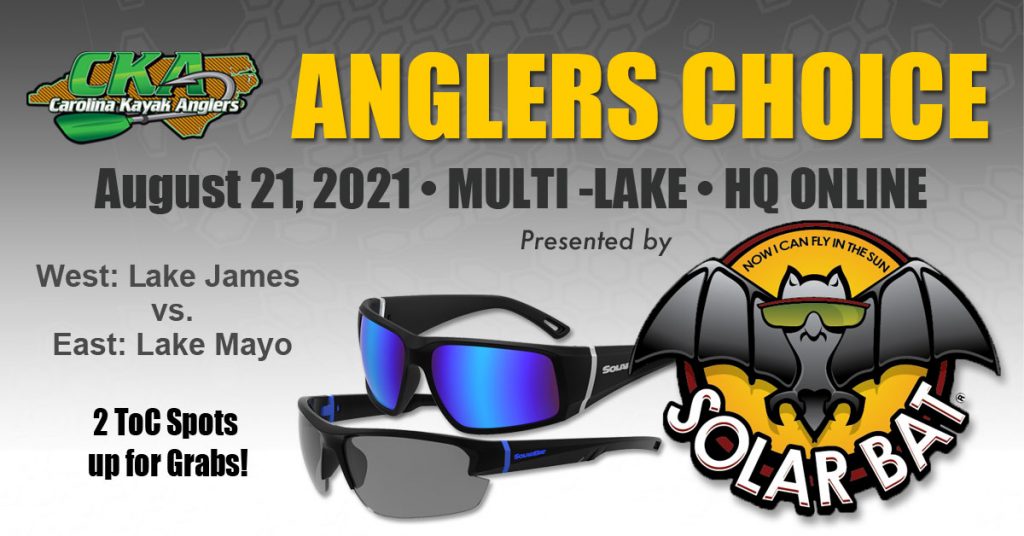 The last regular season event before the Angler of the Year title is decided at the Gate City Classic was a wild one with 16 anglers representing Western North Carolina at Lake James and 26 representing Easten North Carolina.
Both lakes loaded with local hammers taking on the challenge of clear water lakes in the dog days of summer was more of a tight race than we had planned for! 40 of 42 anglers were able to put fish on the board, only 17 anglers were able to grind out a limit however.
Mayo Lake anglers put up 101 fish for a total of 1,204.25″ of bass for an average length of 11.9″ with 11 limits being caught. Lake James anglers put up 63 fish for a total 731.00″ of bass for an average length of 11.6″ of largemouth and smallmouth bass with 6 anglers putting a limit on the board.
At the end of the day, after the boards went down many anglers were finding problems at Mayo and James with uploading their catches on phones using Verizon, regardless of cell signal strength. This caused the director’s to vote to allow additional time for uploads to help anglers at both lakes get their catches submitted, other than that the entire day went smooth for the judging with only 1 fish that was denied due to an angler error with the photo. Always check your photos to be sure the entire board, fish, ID is in the photo along with the other photo rule standards! Release the fish when you are positive you have a perfect photo!
Ronnie Murphy entered the event Friday with the confidence of James being his home lake also believing that he could win a slot in the Tournament of Champions so he opted to send in membership dues as well! Turns out that was a great call as he took the overall win at Lake James with 77.25″ for $780, 2 inches over 2nd place! Ronnie also secured a spot in the Tournament of Champions at Santee Cooper!
Jereme Olshefski came in 2nd place with 75.25″ for $468, beating Rick Morris for 3rd and $312 with a tie breaking bigger fish. Jeremy also secured a spot in the Tournament of Champions being the highest place member at Mayo Lake! Rick was also fishing at Mayo Lake.
Melvin Yang came in 4rd place overall fishing at Lake James for $100.
Rick Morris and Melvin Yang both win a pair of Solar Bat Sunglasses for being 2nd highest at each lake,  Jacob Ly win a $50 Gift Cerficate from Yakattack for their 3rd highest at each lake finish!
Eric Nelson came in 8th place with 69″ with only 4 fish being the only angler in the top 15 without a limit!
The event also raised $100 for Socks and Cookies showing great support for our deployed active military!
Overall Top 10:
1. Ronnie Murphy 77.25
2. Jereme Olshefski 75.25
3. Rick Morris 75.25
4. Melvin Yang 74.75
6. Jacob Ly 72.50
7. Yee Hang 70.00
8. Eric Nelson 69.00
9. Garriett Chavis 67.50
10. Luke Greco 67.00
By Lake Top 3:
Lake James
Ronnie Murphy 77.25
Melvin Yang 74.75
Jacob Ly 72.50
Mayo Lake
Jereme Olshefski 75.25
Rick Morris 75.25